It all started weeks and maybe even months before today.  The people in Köpinge village began to sort through their things.  Perhaps it’s a set of dishes they no longer want.  A new couch or chair might have been purchased and the old one is sitting in the garage waiting as it is collecting dust.  Old clothes that are no longer worn are taken out of the closet.  Books that are no longer being read are removed from the bookshelf to make room for more.  The annual village decluttering has begun. 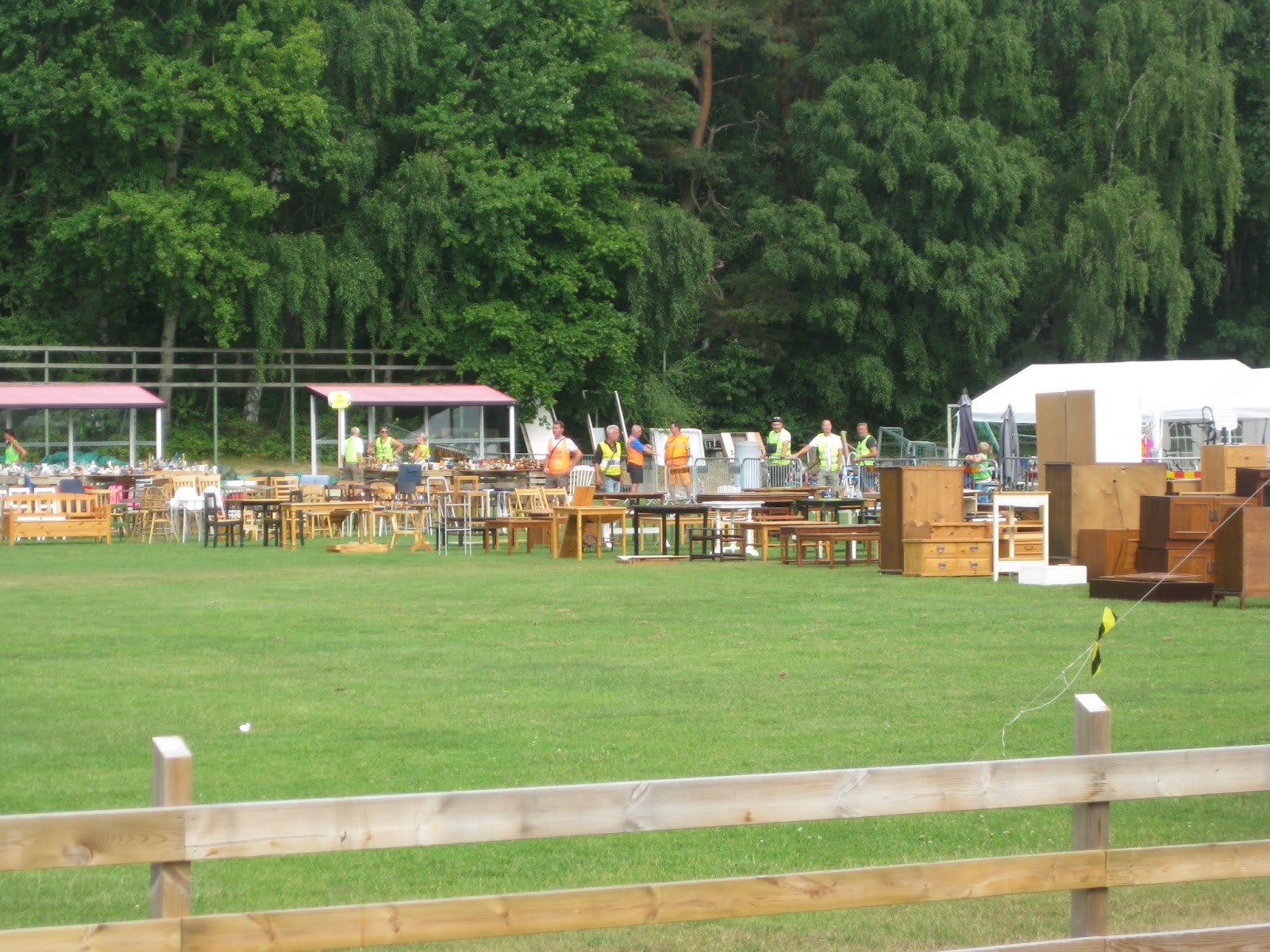 Each household starts at different times and in different ways all leading up to the last Thursday in July.  It is then that all the items that are no longer needed and wanted are brought to the village soccer field.  As boxes show up they are sorted into various categories and placed on tables through out the field.  The furniture lined up in rows taking up a large part of the field; there is a section of sports gear, a table of plates, an area of pots and garden items just to name a few.  All this is done for the big event on Saturday. 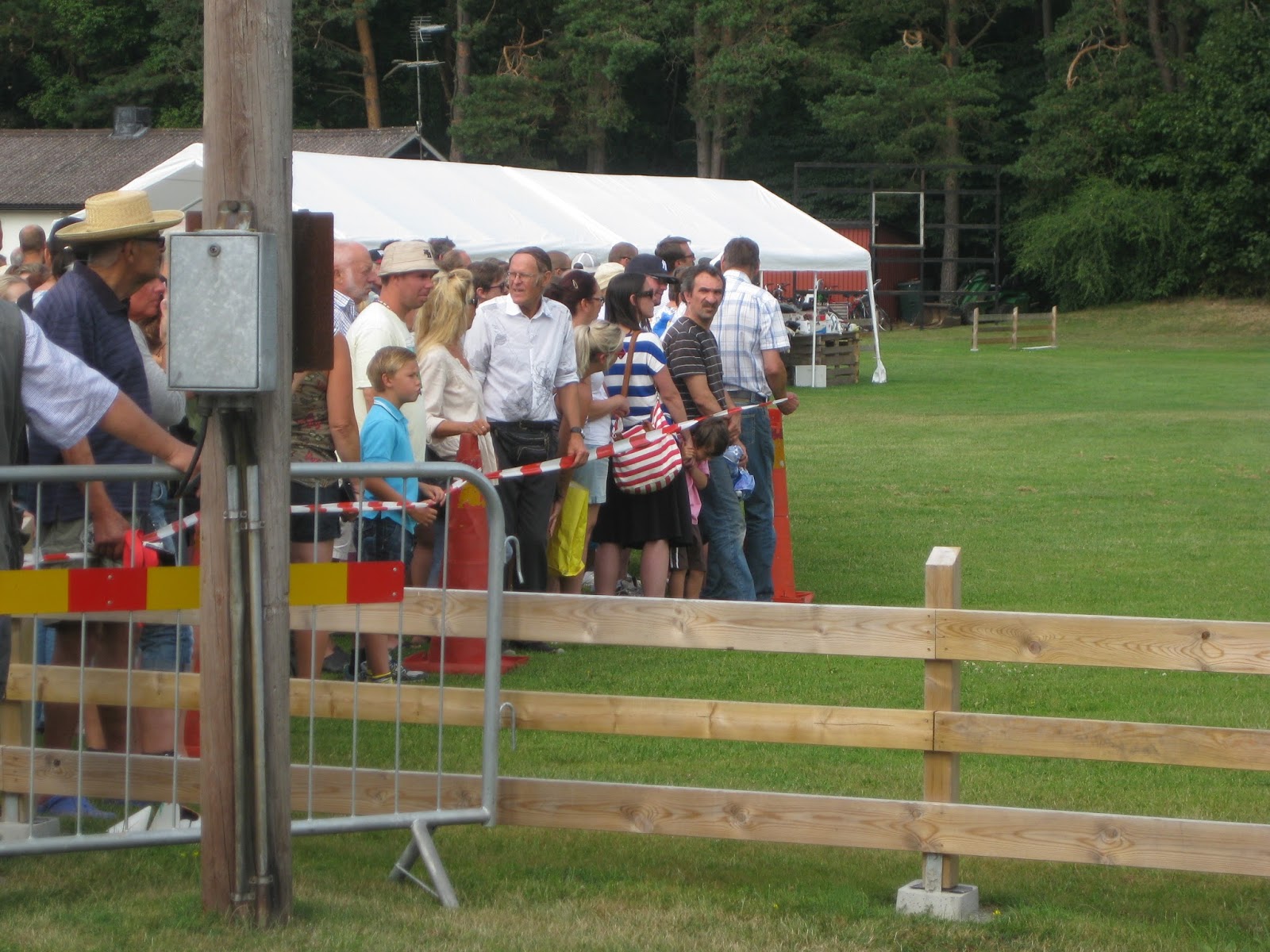 People from all around arrive at the village before 10 a.m. paying their 10 kronor ($1.55) to enter the waiting area outside of the soccer field.  As it gets closer to 10 more and more people arrive and you can feel the excitement in the air.  No sooner and no later but at exactly one second before 10 a.m. there is this huge inhale of breath and it is as if all the air is sucked out of the space.  Then the second hand moves and the moment it becomes 10 a.m. the stampede begins as people rush through the barrier tape.  The ground vibrates and you can hear the swoosh as people run to their area of choice. 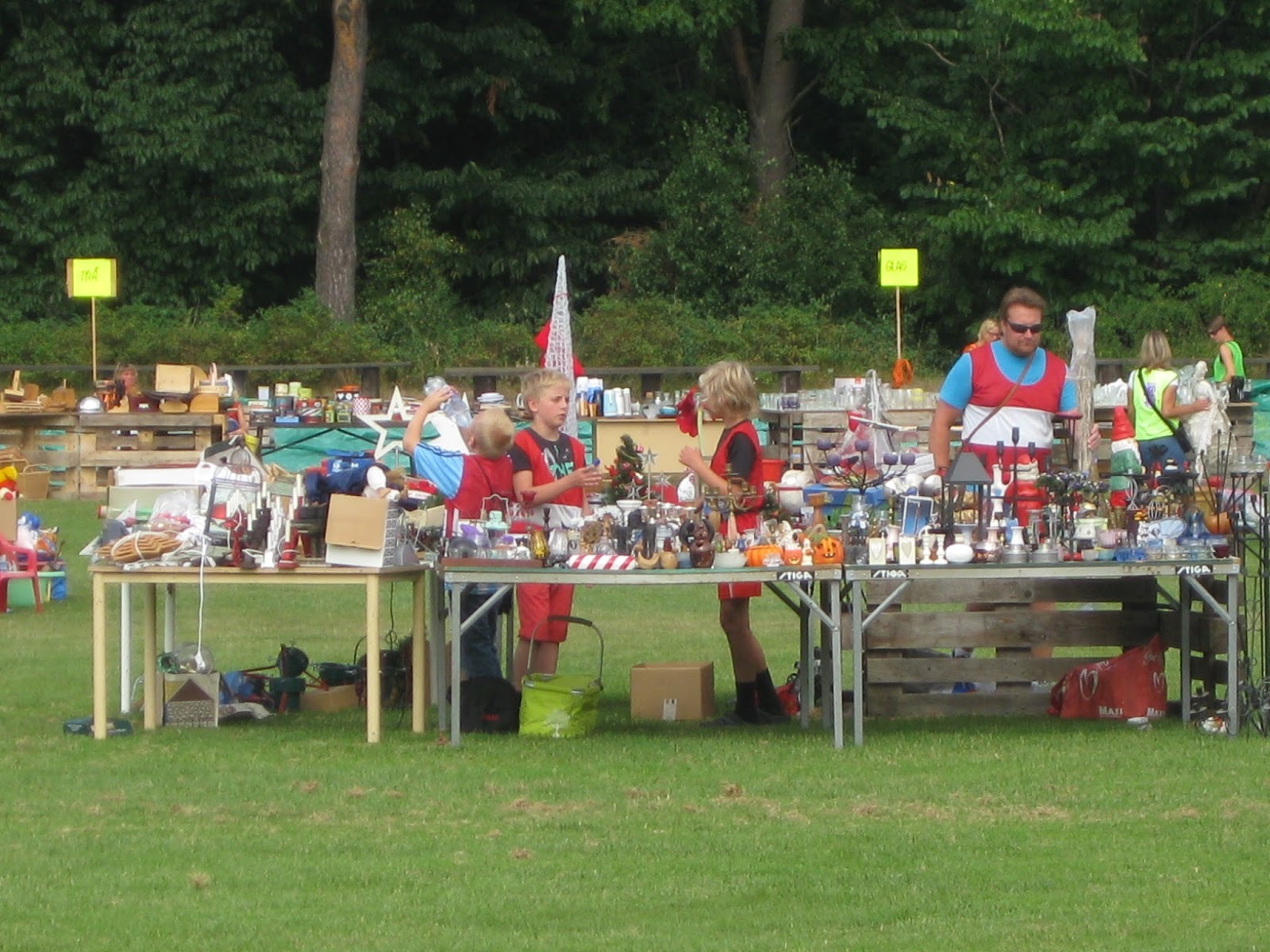 When a person spotted something he liked he would ask a person wearing a florescent vest “Vad kostar det?” (How much does it cost?).  If the price sounded reasonable the money  was handed over and the item taken or something attached indicating that it was sold.  The most desirable items disappeared quickly. Other people who arrived after 10 would wander around leisurely looking for things they may want to take home. There was a vendor selling fish and one selling donuts.  You could buy hamburgers, hot dogs, fish sandwiches (the Swedish version), candy, soda.  It was like shopping at the Deseret Industries of the Good Will but with the Swedish market flair.  As the flee market was close to ending the bargain hunters descended.  Everything was going cheap now. Fill up a plastic bag for 10 kronor or purchase some furniture for a fraction of the price two hours ago.
Suddenly the market ended and two things commenced at once.  Tractors came onto the field and left over items were placed in the shovels and taken to awaiting dumpsters.  The scavengers swooped in and began to gather things that they deemed might have some resale value into piles.  Between the workers and the scavengers the soccer field was cleaned leaving no trace of the items that has been there a few hours before.All the money earned is used by the village soccer club for the benefit of the young people.  I have been told that enough money is earned to cover all the cost for the  young people for the entire year.  The adults cover their own costs.  In Sweden clubs are an important part of the social life and sports clubs are on the top of that important list.

I find this fundraiser brilliant in so many ways.  Just watching the market from beginning to end tells the story of the modern social construct of Sweden.  It was like watching the scenes of a play where everything I had read or had been explained to me was acted out in a three act play.

In a world where we are so attached to things and find it difficult to let go of them, Köpinge village has build into its customs and rituals the mechanism of the annually purge of things.  It is the annual renewal culminating the last Saturday in July where the old is discarded making room for the new.  It is all dressed in the altruistic garb of raising money that goes towards their children.  And in return their children are provided mentors and activities that are both beneficial to the individual and the community.

Many members of the community put in lots of time just to make this day happen.  Some even take vacation in order to devote enough time.  It becomes an event that binds the ties of the community together.  Each year the community comes together again to make it happen.  What a marvelous annual event.

(Note:  This is the village that Vanim grew up in.  His sister and brother and their families live there now and his mother plans on moving back there as soon as we have moved out on our own.)

I have been through this process before. When I moved last year I took three truck loads to the local thrift store as well as a number of things that ended up in the dumpster. Ten years ago I was introduced to the work of Karen Kingston and her book Clear Your Clutter with Fung Shui by a good friend. At that time in my life I started to see a connection to my life and the clutter accumulating in my life. I have begun seen clutter as an outward expression of my inner world. For ten years I have been in the process to declutter my life only to find that it is full of clutter again. I have really taken a serious looked at the relationship I have with the things and objects I keep accumulating in my life, that is until yesterday

With each object I am selling, giving away or throwing away I have asked myself what is my relationship to this particular object. So far I have identified three different relationships I have with the objects and things in my life. I might need this thing or object someday so I hang onto it. I have a memory that is associated with the object or thing that I do not want to forget. And last of all the object is something I use in an activity that I really enjoy.

I might need something someday so I hang onto it. Most of the objects in this category were not even fit to give away and should have been thrown away when their usefulness ended. I had a pair of dress shoes that had holes in the soles and were no longer fit to wear. This is a relationship about the fear of scarcity, that I will never have enough.

I have a memory that is associated with the object that I do not want to forget. I would like to believe that I will never forget those memories but I know better. I have worked in nursing homes before and seen many old people that have very little memory before they pass on. Once again this relationship to objects is based in fear, a fear of loss.

Consumerism has become a demon that haunts me. It consumes me with my possessions. Understanding my relationship to objects and things helps exorcize the demons from my life. This is the beginning of shift from the perspective of objects possessing me to one of me having objects for a specific purpose.