In May of this year riots broke out in largely immigrant areas outside of Stockholm.  It certainly brought the debate about immigration into Sweden into the public dialogue.  Immigration is currently a big part of the   political debate between Democrats and Republicans in America.  The riots in Sweden certainly brought out strong opinions both in the public and political dialogues that were happening in Sweden and abroad.

In the past immigration was an issue that I had very little opinion about.  It was the one area in politics that I tried to avoid.  Deciding to immigrate to Sweden and starting the process of immigration changed all that for myself.  The subject of the riots in Sweden and immigration came up a few times with friends while I was still living in the United States.

While doing some research on Älmhult I came across a couple of news articles about immigration at The Local (Swedish News in English).  The first article Immigrant Areas Have Fewer Social Problems came out before the riots.  The article talks about the Reform Institute’s report where five main area were considered.  These areas were schools, employment, health, money, and hopelessness and alienation.  What the report found was that areas with low immigration populations had as high or higher integration problems than those typically linked to certain immigrant groups.  Also areas where there was higher immigrant populations 16-year-olds had less mental health problems. 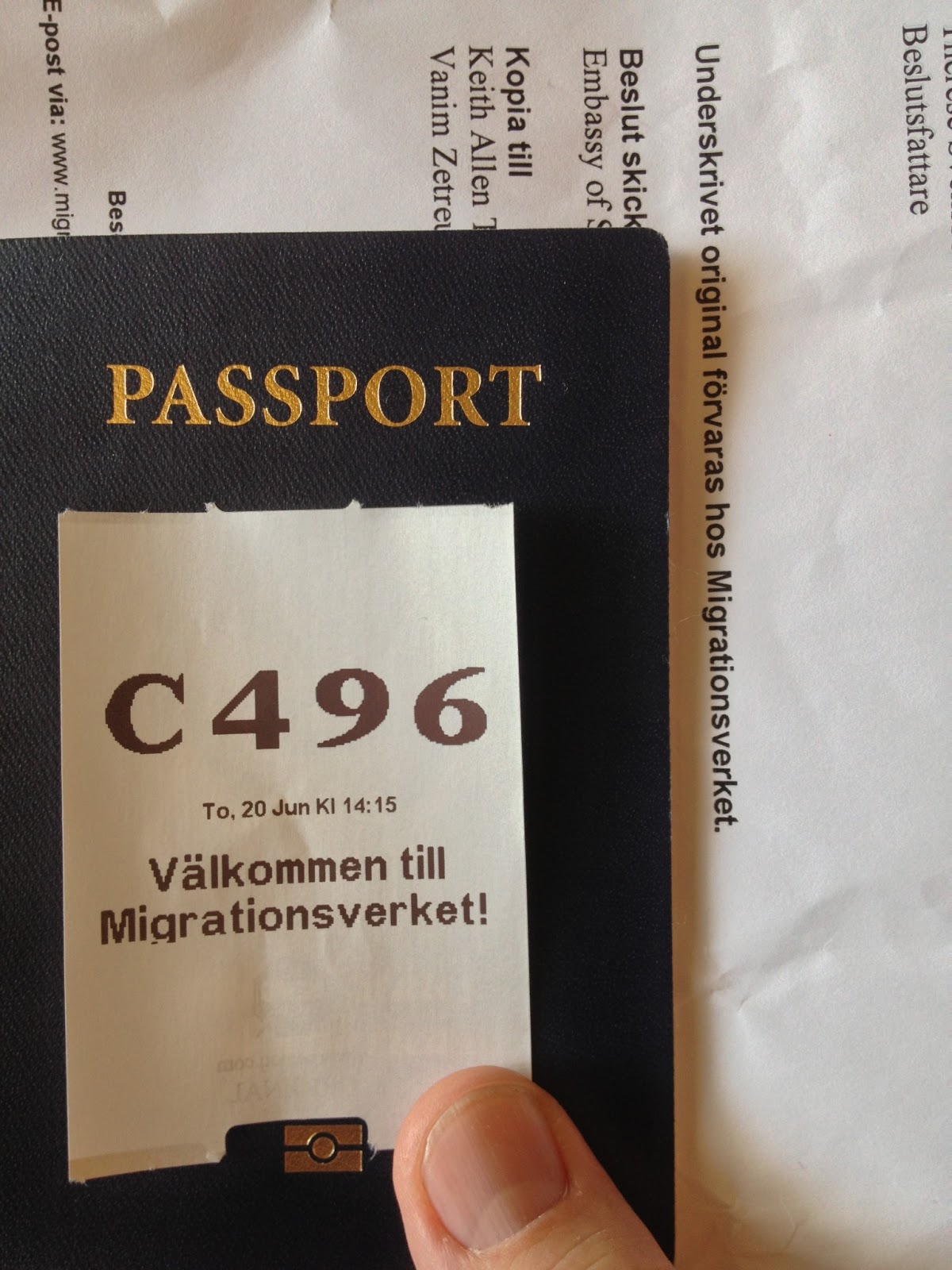 The second article Foreigners Give More To Sweden Than They Get came out after the riots.  The Organization For Economic Co-operation and Development (OECD) came out with a report that compared taxes paid by immigrants to the benefits they received.  What they found was that in Sweden as well as many other countries immigrants paid more in taxes than they received in benefits creating a net contribution to the respective governments where they lived.  In Sweden that net benefit for immigrant Swedish citizen was $153 a year while for an immigrant non-citizen was over $6,500 a year due to lower pension costs.

Becoming an immigrant myself has given me a new perspective on immigration. The riots in the immigrant areas outside of Stockholm show that things are not perfect in Sweden but In both studies from the OECD and the Reform Institute shows that immigration has a positive effect upon Swedish society.

I have three days of work remaining.  In six days I am off to start my new life in a new county.  I will become a love refugee.  “Yes, that’s me: one of the many victims of the Swedish conspiracy of sending cute Swedes around the globe to fool foreign men and women to fall in love with them and move here” wrote Anthanassia Fourla in an article of The Local “Are you a love refugee?” (published 11 FEB 2009).  So here I am completely enamored and in love with a man whom I am moving 5,000 miles away from my current home so that we can continue building our life together.  Emma Chataway wrote “It’s wonderful and scary to take this step for someone you love. To move to another country and try to set up a life together. It also feels nice to have a good moan about his country too, the way he did in mine. I finally get to say, ‘Well in Australia…'” In my case I get to say “Well in the United States . . .”  I first came across this term while doing research on the internet about moving to Sweden.  It appears to be a common term in Sweden.  Soon I will join the ranks of other “Love Refugees” and become an immigrant to a new country.

On January 9, 2013 I applied to the Sweden’s Migration Board for a residency permit.  On May 27, 2013 my permit was granted.  It took four months and nineteen days (139 days) from submission to a decision.  If Vanim had tried to get a regular residency permit for the United States, it would have been a completely different scenario.  That is making the assumption that the United States government would recognize our relationship which at this time they would not.  The United States even has a special visa (K3-K4 non-immigrant visa) for spouses allowing them to enter the United States before their regular visa is approved.

Receiving the decision about my residency status in Sweden was the last major hoop to jump through before moving there.  Finding out was a great relief, it was like having Christmas in May.  Now I will enter a foreign country as a resident instead of a visitor.

Because the two suspects in the Boston Marathon bombings were war refugees of Chechen ethnicity, immigration and terrorism have once again collided in the public discourse and the political landscape.  Some members of the Senate Judiciary committee used the events in Boston in what sounded like an attempt to derail the current immigration bill.  There is this implied notion that proper immigration legislation could and would have prevented this tragedy from happening.  I began exploring that notion and this post is about my explorations of this notion and the twisting path that it lead me down.

I concluded relatively early in my research that  this notion of having “proper” immigration laws would protect us from would be terrorists, in this particular case is false and misleading at best.  The very fact that they were war refugees and immigrated to the United States as asylum seekers before they were adults suggests to me that no legislation would have prevented the Boston Marathon bombings. The International Business Times has a basic timeline of the lives of the suspects Tamerlan and Dzhakar Tsarnaev which I found helpful.

The Washington Post blog post by Max Fisher gives a simple basic overview of the Chechnya and Dagestan region where the Tsarnaev brothers were from.  I found a little bit more in-depth history of the area up to 2000 in an article The Chechen Refugees by Johanna Nichols in the Berkeley Journal of International Law.  As the media and public conversations try to grapple with why these two suspects planted the bomb in the first place I have found in the midst of this a heartbreaking story of a group of people continually forced to immigrate either by government mandate or war.

This whole concept of immigration has started to take on a more complex and nuanced life for myself.  In the past immigration was just a blip on the historical radar.  At different points in history one of my ancestors immigrated to American culminating in me.  The only physical connection I had to immigration was as a young child with my great-grandfather who immigrated from England as a young child himself.  Something I did not know until I was much older and he had passed on.  I am choosing to immigrate to another country.  This is a choice based out of love of another person and out of the love of adventure.  On the other hand the Tsarnaev family was forced to immigrate along with many other Chechen people.  What are the effects of forced immigration?

A few years back I was nominated to be a delegate for the Utah State Democratic party in my voting precinct along with two other people.  We were each asked questions by other people in the precinct who were present.  One of the questions was my view about immigration.  It was at that moment that I realized I had either a for or against attitude.  I was unable to articulate a clear position on immigration that I truly believed in.  All that I could think of was news media sound bites.

When I hear the current rhetoric coming from politicians it leads me to see them as ignorant as I was a few years back.  Fear sells. Connecting the Boston Marathon bombings to immigration sells the fear of immigration.  It effectively derails a meaningful discussion about immigration if we buy into this fear.  Immigration is a human endeavor.  For immigration to be a human process I propose it requires us to get past the either for or against media soundbites and actually become educated about immigration and its effects.

In December of 2012 it become clear that my partner Vanim Zetreus, would have to return home to Kristianstad, Sweden.  He is currently here in a student visa. So January 8, 2013 I submitted my application to become a resident of Sweden to Migrationsverkets which is the Swedish Migration Board. They handle immigration and residency applications.

Because Van and I have an established relationship and one that can be recognized by the Swedish government I am able to immigrate to Sweden.  It would not be possible under current U.S. law for Van to obtain a work visa or residency status here in the U.S. based on our established relationship.  We live in a state where same sex couples are not allowed to get married. Even if we were legally married under U.S. Federal law we would not qualify as married under the definition of spouse because of DOMA .

From the Travel.State.Gov web site defining a spouse for purposes of immigration to the United States.

A spouse is a legally wedded husband or wife.

Immigration has become a big issue in both Sweden and the United States in the last few years.  Anti-immigrant sentiment has become stronger.  The United States Senate is currently debating a new immigration bill called “The Border Security, Economic Opportunity & Immigration Modernication Acto of 2013“.  The Human Rights Campaign in a email two days ago stated “by amending the immigration reform bill with UAFA, the same protections given to opposite-sex binational couples will be given to same-sex couples. Simple as that.”  Immigration issues and issues of equality for LGBT community have collided together.  A headline for the USA Today Senator: Boston terror case reframes immigration debate.

I had considered doing this blog for a couple of months but keep deciding against it.  Yesterday Kat Phillpotts shared an article in Scientific American by Maria Konnikova “Why grad schools should require students to blog.”  After reading this article I felt encouraged to share my experiences and thoughts about my new adventure in life.  So thank goes out to Kat Phillpotts and Maria Konnikova.  I also owe thanks to my writing group The Tip Top Tellers of Tall Tales for their encouragement and the fun times we have had together in our writing and non-writing adventures.